The Maldives is an archipelago in the Indian Ocean, comprised of nearly 1,200 coral islands of varying sizes, around 200 of which are inhabited. The islands are grouped into 26 atolls, each of which has two names: a traditional local name and a “tourist name” which is generally shorter and easier to pronounce. This exotic island group is absolutely idyllic, popular for honeymoons and other romantic getaways, as well as luxury retreats and Maldives family holidays.  If you are on a tighter budget, then there are available holiday apartments in the Maldives.

Where to Go In the Maldives

Most package holidays in the Maldives include accommodation at one of the secluded resorts that this island group is famous for. Resorts in the Maldives are typically located on their own islands, each with its own beaches and a surrounding coral reef for swimming, scuba diving and snorkelling, and other activities. The perfect location for luxury holidays in the Maldives, with the privacy of each island adding to the feeling of indulgence that comes with the incredible beauty of the landscape and beach. Many luxury resorts feature over-water bungalows, built on stilts in an island lagoon. Others have private bungalows located on a beach-front with a small private beach attached to each.

For visitors who prefer a truly private getaway, villa holidays in the Maldives provide the perfect solution. Many villas are, just like the resorts, located on a beach-front, and some even boast their own private beaches. Many villas and guest-houses are, unlike the resorts, located on inhabited islands. This provides the chance to meet local residents, who are typically welcoming and friendly, and get acquainted with the local culture.

What to See and Do in the Maldives

Need to Know Info for the Maldives

The official language of the Maldives is Maldivian, of which there are several dialects; English is widely spoken by people who work in resorts and other parts of the tourist industry, and by most government officials. The unit of currency is the Maldivian rufiyaa; however, according to current Maldive law, all resorts price their additional services in US dollars. This means that if you’re heading directly to a resort, and don’t plan to visit any inhabited islands, it may not be necessary to carry cash or purchase any local currency. However, if you plan to visit other islands or go on resort excursions, it may be useful to have some rufiyaa on hand.

The Maldives has a warm tropical climate, with high humidity and average temperatures in the 30s all year round. The seasons are distinguished mostly by the amount of rain that falls, with the heaviest rainfall between September and December.

Most travellers to the Maldives arrive at Malé International Airport, which is located on Hulhulé island near Malé. Several international airlines serve the airport, including UK, European, and South-East Asian airlines. The other international airport is Gan, located at the south end of the Maldives, however, this airport is much more limited in terms of connecting locations and airlines. All travellers who enter the Maldives can obtain a visa on arrival in the country, as long as they have a valid passport, proof of sufficient funds, and proof of a means of exiting the country. Travellers can apply for visa extensions of up to 90 days in Malé.

As the Maldives is an island group, most travellers within the region get around by sea or air. Chartered speedboats take the place of taxis, and a public transport system of ferries travels several times weekly between the major islands. Many resorts have their own boat services that pick up people who arrive at Malé International Airport. For faster travel, there are seaplanes that operate as air taxis, typically used by travellers wanting to get to resorts at a distance from Malé. There are also scheduled plane routes that fly people between the larger inhabited islands.

One thing that’s important for visitors to understand is that the Maldives is a Muslim nation, and this means that certain things, including alcohol and pork, are not available on inhabited islands. Another thing to note is that on inhabited islands, the weekend period falls on Friday and Saturday rather than Saturday and Sunday, and banks and government buildings are closed on weekends. These rules don’t apply to resorts, however. 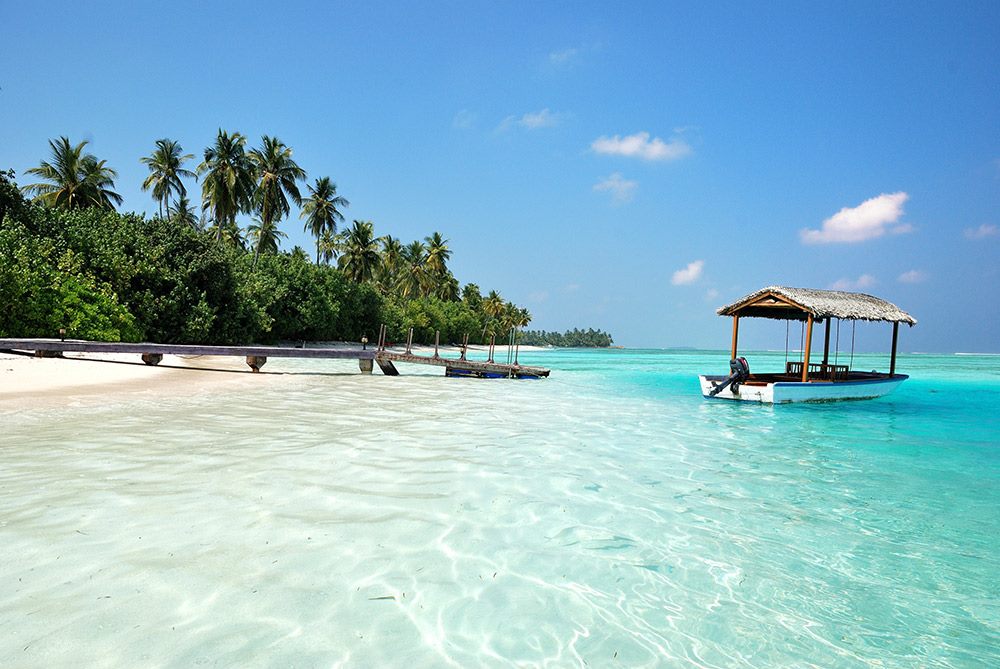 Photo by Colin Watts on Unsplash

Cancun Holidays in Mexico for 2019

All inclusive holidays to Bora Bora