Barcelona in Spain is a popular destination among travellers around the world. From its enchanting basilicas, museums and the fascinating Güell Park to the nightlife and food, you are bound to be fascinated by everything Barcelona has to offer. 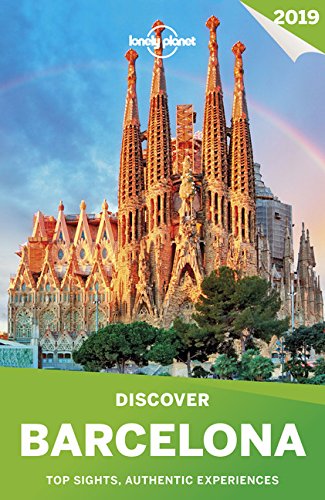 Lonely Planet Discover Barcelona 2019 (Travel Guide)
One of our recommended reads. This book has a source of useful information about Barcelona
Buy on Amazon

For a bit of relaxation and summer fun, put your feet on to the sand and enjoy a dip in the ocean. After the sun sets, experience a bit of the nightlife at some of the beaches. For shopaholics, take home some of the latest fashion trends and fill your suitcase with Barcelona’s best. Travel to the Raval for some great shopping, good food and Spanish culture.

There is plenty entertainment on offer in Barcelona. Head to Razzmatazz which has 5 different rooms with deejays playing great tunes. Stop off at one of the city’s bars and cafés to enjoy a couple of drinks. Try some tapas when you drop in at one of the bars. Tapas is a must when you’re in town.

If you are in town during late summer, you will be in time for La Mercé, the city’s own festival. The festival consists of cultural events, shows and fireworks. Another famous party spot is the Grácia neighbourhood who host the best street parties.

If you feel like some fresh air and want to experience a bit of nature, go on a hike to one of the villages in Barcelona or wine fanatics will enjoy a wine tasting tour. There is even a tapas walking tour of the city. Book a hop-on-hop-off tour and let you’re your guide take you everywhere you want to go. Pack your bags and let Barcelona entertain you.

Things to do on your trip

This magnificent example of Gothic and Byzantine architecture should be high up on your list of things to do in Barcelona. The basilica is still under construction more than 100 years after building began. Access to the Sagrada Familia is still possible though. The history of the Sagrada Familia also known as The Temple of the Holy Family dates back to 1866 when a spiritual association instructed Antoni Gaudi to build a temple, but the first stone of the building was only laid in 1882. This inspiring basilica with fantastic stained glass windows is probably one of the most beautiful cathedrals in the world. The Gaudi exhibition will take you through the history of his architectural style as you look through items and information. A visit at sunset is highlight recommended to enjoy the colours glistening from the stained glass windows. During the afternoon, the colours glistening from the windows inside the basilica is amazing too. Even though it’s still under construction, the basilica remains one of Spain’s most visited attractions. There are guided tours of the areas open to the public.

A truly wonderful basilica in every sense, the Santa Maria de Mar was built in the 14th century in true Gothic style. Some artwork you will see are The Crowning of the Virgin Mary and The Birth of Jesus. Stained glass windows never looked this good: There is the Rose Window, the Last Judgement completed in 1474 and Fountain of Living Water. The Gothic-inspired crypt has a sculpture of the Virgin Mary with a ship at her feet. A view from the top of the basilica is sublime, don’t miss this. There are often music recitals at the Santa Maria del Mar.

This is your chance to feast your eyes on works of art from one of the world’s most well-known artists, Pablo Picasso. The permanent collection has over 4,000 pieces of art on display. Five townhouses make up this museum and the buildings themselves were built between the 13th and 15th Check out some of the museum highlights of this artistic genius which include Man in a Beret, The divan and Decadent Poet. Also exhibited here are ceramic pieces and engravings. Guided tours as well as audio guided tours of the Picasso Museum.

A site to behold, Barcelona Cathedral is made up of 3 naves, each nave is divided into 5 sections. When you tour the cathedral, you will come across the coffins of the previous church founders and a crucifix above the altar of Sant Crist de Lepant. In the central nave, you will find marvellously carved choir stalls. Located under the bell tower is the cathedral’s organ which was built between 1537 and 1539. Make your way down into the crypt where you will see the tomb of Eulalia, one of Barcelona’s patron saints. Take a trip up to the cathedral’s roof for great views of the city. Attend an organ concert if you wish. Visit the museum’s website for details.

One of Europe’s largest and most famous food markets, Boqueria Market is filled with locals and tourist, all seeking a taste of Spain. Fresh produce at fruit and vegetable stalls permeate through the air. You will also find anything from meat, cheese and seafood here. Even try some salted cod! Surrounding the markets are bars to quench your thirst after your shopping spree.

An old fortress, the castle offers superb views of the city. It was also one of the important locations in terms of deference during the War of Spanish Succession from 1705 to 1714. The castle was restored in the 18th century and used as a prison until 1960. In the central courtyard, visitors will see old guns. Take a stroll along a sea-facing path for views of the city.

Antoni Gaudi is the mastermind of this landscaped park with small houses. The park is quite enchanting with its roads and walkways. From the entrance make your way to the mosaic dragon and then to a forest of columns and also go to the house where Gaudi lived. Look through artefacts that belonged to him. Park Güell is popular among tourists. It’s an ideal spot to take photographs and have a picnic. Add this attraction to your itinerary. It is advisable to book ahead online before visiting the park.

Singers such as Luciano Pavarotti, Placido Domingo and Maria Callas have graced the stage of this beautiful opera house. One of Barcelona’s major attractions, the opera house is also home to the world’s second largest Wagner festival. Gran Teatre del Liceu was inaugurated in 1847 and in 1994 it was badly damaged by a fire. Today the auditorium seats 2,300 people and it has become an important cultural centre for Barcelona. Take a tour of the opera house where you will get to see the Hall of Mirrors and the theatre booths. Take a look at what happens backstage and explore various rooms.

Cancun Holidays in Mexico for 2020

All inclusive holidays to Bora Bora