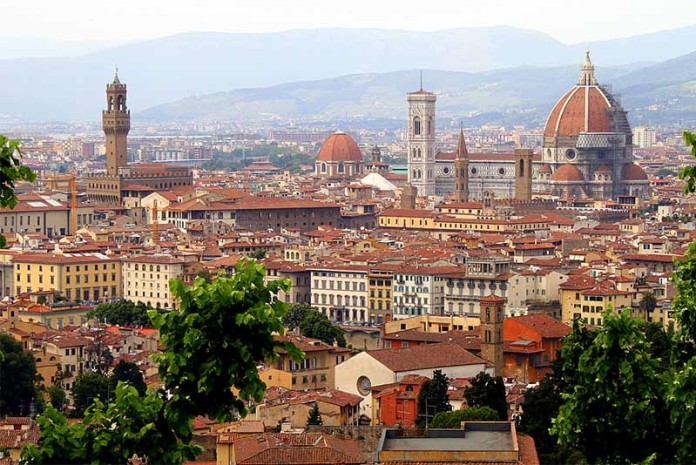 Florence, the highlight of Tuscany and the birthplace of the Italian Renaissance. Famous for its beautiful architecture with terracotta tiled floors and roofs, UNESCO has recognised the historic city centre of Florence or Firenze as a World Heritage Site.

It is this same site that was, in 2013, ranked the 40th most visited place in the world out of 100 cities. Florence is situated in a basin-like valley, surrounded by various hills; one of the four notable rivers that run through the city is the Arno River.

The wine from this part of the Tuscan region in particular is known the world over. It is also a bastion of the fashion world, being among the top 51 fashion capitals in the world. In other words, if you’re travelling to Italy but not stopping in Florence, you’re missing out!

The main church of Florence, the Cathedral is also known as Il Duomo di Firenze or The Dome, can be seen from almost every corner of the city. It took a century and a half to complete the construction of this majestic building, the largest dome built from brick and mortar in the world, completed in the early fifteenth century. It is located in the Piazza del Duomo, together with the Baptistery and Giotto’s Campanile, which all form the historic city centre of Florence.

Take a day trip from Florence via rail to Pisa, to visit the famed Leaning Tower. The Leaning Tower of Pisa is the bell tower of the main Cathedral of the city and this tilting structure is a symbol synonymous with Italy.

The trip is about one hour one way and so making a day out of this must-see tourist site is easy. Try and make time to take a fifteen-minute train ride to the port city of Livorno on the Western Coast of Tuscany, particularly if you do not get the chance to visit the ocean elsewhere in your trip to Italy.